CI? I thought you used TPRS!

Among several proficient and reputed experts of TPRS (Teaching Proficiency Through Reading & Storytelling), there has been some discussion about how one defines oneself. There is no shortage of acronyms to go around, of course, but recently there has been a significant number of teachers dropping the TPRS label and instead referring to themselves as CI teachers.  CI?  No, people are fans of this site enough to have become CI teachers in my honor.  In this case, CI stands for Comprehensible Input.

Stephen D. Krashen wrote about comprehensible input in his Comprehension Hypothesis long before I began teaching.  Here is a link to Krashen’s writing if you want to read the source.  Since then he has refined his hypotheses to include the indispensability of compelling input.  But the point is that if we are able to understand messages, and do so repeatedly enough, language soaks into our brains.  This happens faster if we’re interested in those messages. 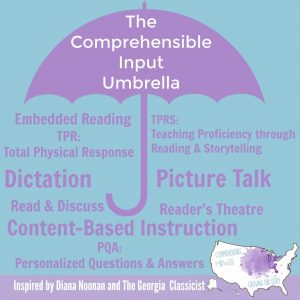 So claiming oneself to be a CI teacher, is a statement that a teacher acknowledges that language is acquired through comprehensible input, and that teacher develops plans in order to provide students with a maximum amount of comprehensible input.  And TPRS teachers fall under this umbrella.

TPRS is a specific 3-step method.  And the goal of TPRS is to provide students with repetitive, comprehensible input.  But why are some TPRS experts dropping that label?  A couple of reasons.

So, TPRS is CI.  But not all CI is technically TPRS.  And my thoughts?  A TPRS-based class with other CI activities for variety is probably the best of all possible worlds.

So what are CI activities? How does one use CI if it isn’t TPRS?  You’ll just have to read more about that in my next update!