This year I read El capibara con botas by Mira Canion in my Spanish 1 class.  We started this book on roughly our 8th day of every-other-day of block scheduling classes.  Which means in a typical HS schedule, this was about Day 12.  I can’t stress how impressed I am that Mira was able to write a

What I like about this book is that there is not only a cute and silly story (Carlos the capybara cannot swim well, but goes on a long trip to help save his rainforest lake home from the Puma and the Jaguar), but deals with real issues.

This story is ripe with “other” topics to discuss–friendship and bravery, deforestation and environment, acceptance of self and others who are different.  It is fantastic.

I’m not going to lie, this bright idea of mine was a case of necessity being the mother of invention.  We were doing “Instructional Rounds”…classes are observed by small groups, and then they discuss things that they saw in classes to determine trends across our school.  And one of our goals this year is to increase student collaboration and how students “interact with each other’s thinking and a text”.   So I knew I needed students to interact.  And think.  With each other.  And a text.

So I divided them into groups of 3 based on where they were sitting and handed each student this chart.  Each student had to follow th 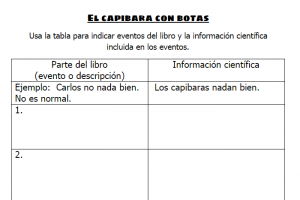 e example and fill in the first 2 rows with quotes from a book that also give some science information, even if it isn’t explicitly stated.   As the example says, “Carlos doesn’t swim well.  He isn’t normal.  So the science information is that capybaras DO swim well.  After completing their own, in their groups of 3, they had to share their 2 facts.  Rows 3 & 4 on their form were to be filled in with information, one from each other person in the group’s brain.  Row 5 could come from any brain in the group, their own or a partner’s.

It was really impressive that students were (mostly) able to infer items not explicitly stated from the reading, and while this was only one instance, this is definitely an Intermediate-Advanced level skill, and certainly calls for critical thinking on the students’ part, without needing to have a huge amount of language at their disposal.  Because it was based on comprehensible input, although their discussions were mostly in English, there was a lot of analysis and interpretation of target language text.